Pat & Kevin were charmed by the bed and breakfasts and the gracious and inviting hosts during their honeymoon trip to Ireland in 1992. That next year, Pat took an Adult Continuing Education course in “Operating a Bed and Breakfast”. Ten years later the opportunity arose to do just that. Both Pat and Kevin are originally from the Hudson Valley region of NY, neither have lived outside the state – Pennsylvania isn’t too far! Kevin took a transfer with his job at Yellow Freight in September 2003 to Lancaster, PA (Dutch/Amish country) – downsizing may have eliminated his position in NY soon anyway. We decided to look for a house with Bed & Breakfast potential, or an existing one for sale. The short of it is: we found what we were looking for and after some renovations, opened for business in April 2004.

The previous owners ran the inn as “The Trolley Track Inn” from the rail bed that runs along the east side of the property. Pat decided that the name did not sound very restful, so with the help of former coworkers [good luck poem – “Patty put the kettle on, and we’ll all have tea!”], and Pat’s growing teapot collection, the name was born!

Naming the individual rooms was another matter. After many months of trying to come up with “tea” names and soliciting help from family and friends, Pat decided to relate the names to quotes from children’s fictional literature classics.

Kevin and Pat enjoy meeting new people (and old friends) and share a love for hospitality and good food. Kevin enjoys woodworking, camping, and finding that perfect patch on green [he’ll gladly join you in a round of golf!]. Pat’s hobbies include reading, researching genealogy, and crafts, crafts, crafts! 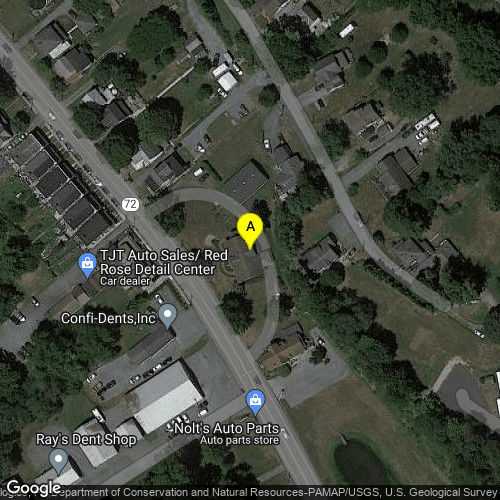